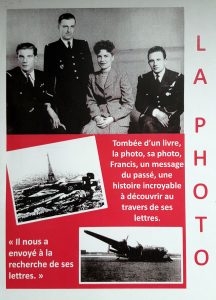 La Photo (Love in Times of War) &  The Letters of Francis Usai    a « docu-lecture » about the largest single collection of wartime letters in France, with actors, original film and historians, first shown at Institute Français, South Kensington, London.

The Beginning of the Story

Prior to the fall of France on 22nd June 1940, French Air Force personnel and their serviceable aircraft had pulled back to Oran in Algeria in order to re-group for the fight ahead, but in a matter of days the Armistice with Germany was declared and on 10th July the Third Republic was dissolved and Marshal Pétain was granted full powers by the National Assembly for form a new collaborative government in Vichy. The fighter and bomber groups of the French Air Force, were to spend the next 29 months under German supervision, allowing them only 4 hours a month flight training time in their obsolete Leo 45 medium bombers.

On 8th November 1942, « Operation Torch » saw the Anglo/American invasion of North Africa which released French combatants from Algeria to re-join the Allies. Almost immediately the French Air Force bomber squadrons were able to fly their old aircraft with the Royal Air Force on attacks against German positions in Tunisia. As one French pilot said “we could not wait to put real bombs in our aircraft, and show the British our will to fight, despite our antiquated aircraft and lack of training.

Eventually the first French airmen were re-grouped and left Algiers in high spirits for Gibraltar, with the knowledge that they were to train in new British four-engined heavy bombers. RAF Bomber Command already consisted of airmen and women from over 60 nations across the World.

The first French airmen sailed into Liverpool on 9th September 1943. On the dockside at Liverpool was the Allied Reception Centre of The British Council. This catered for around 6000 people per week and had been placed there to welcome Czechs, Poles, Belgians, Russians, Americans, French and many other nationalities who had come to Britain since 1940 to help liberate Europe, and it was at this reception centre in 1944 that two young Frenchmen men met and fell in love with two British girls who spoke French and helped to serve tea and cakes to the arriving soldiers, sailors and airmen.

Retraining was essential with different aircraft and equipment as well as radio procedures and navigational controls. This was necessary as the RAF missions were often on a scale unknown to the French, and included up to a thousand aircraft at once. Plus with over 1,500 airfields in constant  operational use across Britain – and all speaking English – retraining was clearly very necessary.

Like all airmen, they were split into their roles and duties, with pilots, navigators, radio operators, bomb aimers, gunners and mechanics all distributed to the various specialist training establishments right across Great Britain. Eventually, after months of specialist training they undertook flying training and grouped into aircraft crews.

Right at the start the Royal Air Force told all their bomber crews that they had a realistic 50% chance of survival. All aircrews were volunteers as opposed to other services which were conscripted. So right from the outset the aircrews were given the choice if they wished to continue, with a chance of one in two of being killed – not good odds, but none refused. By the end of the war in 1945, the Royal Air Force were to lose over 70,000 airmen killed, 57,205 of these were from the bomber squadrons.

So it was, that in May 1944, after months of intesive training French airmen eventually arrived in the North Riding of Yorkshire, where they reformed their original two Armée de l’Air bomber groups 2/23 & 1/25 into No. 346 Squadron “Guyenne” and 347 Squadron “Tunisie” on  16th May and 20th June 1944 at an RAF base near York. These sole French Heavy Bomber Squadrons were to fly the latest Handley Page Halifax four-engined heavy bombers and night after night they would perform dangerous missions over heavilly defended enemy territory from before D-Day to the attacks on V1 & V2 rockets sites and onto the Battle of the Ruhr – the most heavily defended place on Earth.  The physical and mental pressure upon these young airmen was immense and by the end of hostilities the two French Squadrons at Elvington lost 51% of their airmen and 41 aircraft in just 8 months.

This photograph taken in York on 4th October 1944 lead us to the discovery of one of the largest collections of letters in WWII and, thanks to that correspondence, to the discovery of a tragic but fascinating and intertwined story of these four characters and the girl to which it was sent. A story which still resonates today.

During 2009, Geneviève Monneris and Ian Reed were searching for documents and photographs for a film she was making about Sgt. Henry Martin and his young English wife, Pat. (See attached article « Flightpaths »)

By an extraordinary series of coincidences Ian discovered an old damaged photograph, which simply « fell out of a file » at the archives of the former French base near York, showing a young lady surrounded by three French airmen. On the reverse was the date, 3rd October 1944, and the names of Henri and Pat Martin, Jacques Leclercq and Francis Usai.

With the photograph was a note, dated 1995, and the address of a person living in Western Australia. The chances of this, now elderly lady, still being there after 14 years was small, but Ian wrote to her and just a week later, received a reply. The lady was Mrs Barbara Harper-Nelson and, as an 18 year old university student learning French, had met Francis’ when he landed in Liverpool with the French airmen recently liberated from Occupied North Africa. She became his girlfriend throughout the War and from this first contact in 2009 the hundreds of letters of Francis Uzai, which she had meticulously kept for many decades, were revealed to us.

From an academic and historical perspective, the letters are probably one of the largest collections of their type, and Ian and Genevieve were eventually able to formally present the originals, which encompassed over 1000 pages, to General Gilles Robert, Director of Service Historique de la Défense (French National Military Archives) at Château de Vincennes, Paris, in November 2010, to become part of the French National Collection.

The added value of these almost daily accounts of life and love in wartime was that Barbara had also kept a daily diary, so that there was in effect a two-way conversation available to us. As a love story, Francis’ letters and Barbara’s diary, gathered together after 67 years, are very emotional.  Francis was a well-educated and entertaining writer from a village near Marseilles. As a young 21 year old he had a particluarly exuberant character and was playful and funny, which comes out in the many humourous events and « scrapes » they got themselves involved with. This comes across almost as an over- reaction to the close tragedies going on behind them every day and Francis’ regular experiences as a mid-upper gunner in a slow and vulnerable Halifax heavy bomber , especially when operating over the heavily defended Ruhr area of Germany. As with all the RAF bomber crews, the French squadrons lost 50% of their crews in a few short months, and due to wartime censorship, Francis had to keep all the details and the horrific casualties to himself.

As a social history document the letters are highly significant. This story tells a fascinating account of a foreign airmen exiled in Great Britain whilst his country had been invaded, his thoughts and aspirations for a free France and a free world; the pressures of dangerous missions; the horrific loss of close friends and the often misunderstood, exuberance borne out of unimaginable stress.

Barbara’s diaries completes the other side of the story and recalls a fascinating viewpoint of a young British girl amidst those tragic events and daily life living in wartime Liverpool, which suffered from regular and heavy bombing.  Their personal perspective on the main events and daily life, from 1944 to early 1946, particularly strikes a chord with us today, yet on the other hand, it is such an amazing coincidence that Francis wrote in one of his letters of 1944,: “In seventy years’ time, they will talk about Barbiche who saw England invaded by all those odd strangers who stole young girls’ hearts” – a prediction which was to come true exactly 70 years later!

Barbara worked closely with Ian and Genevieve until Barbara’s death in 2017. Genèvieve’s  perseverance  and meticulous hard work eventually brought together the letters and diaries into a fascinating book with the main translation undertaken by Michel Darribaude (son of a 346 Sqd veteran) at l’Université du Sud Toulon Var. First published in English in 2012, its title “The Bright Squadrons” was Barbara’s idea as a quote from “The Ministry of Angels” by the 16th century poet Edmund Spencer. The book was republished in French in 2015 as « Les Bombardiers Lourds Français de la RAF » and again in English as « The French Squadrons ». They can both be obtained from :

In his letter to Barbara written from his hospital bed on Victory in Europe (VE) Day, 8th May 1945, and thinking of their young friends who have died in the previous weeks, Francis tries to come to terms with what Victory really means:

“It is done! But I feel nothing. I do not have the feeling that the war is over. Of course it is not finished. The suffering of millions of people are finished. That makes me happy, but I have no enthusiasm. I must cry and sing and I had only 2 tears at the Victory announcement. It is the truth. I never dreamt of having Victory Day in hospital. Since the beginning of the war I dreamt of flying over the Arc de Triomphe on the day of Victory. But I must remember that our soldiers in the Far East are in a worse position than I. Some died yesterday and will continue to die tomorrow just as before. They will never see their country again, and me? I have just a hope to see it again. But I admit to you, I feel melancholy and hope to see my village with lots of lights and to hear songs and shouts coming to me. I must be happy because my colleagues are happy and you are happy I think. You are stronger than I am. The ward was very quiet, very empty. There were just 3 of us, the rest were in the city. It wasn’t envy Darling; it was just a little despair. I wanted to have you near me and maybe I will have a cry, but it has been good. All strange, complex and paradoxical feelings, which agitated my soul during these 2 days, I can’t explain them or analyse them. Something heavy and light, amazement, joy too, but beyond sadness”.