News Items including commemorations attended by representatives of AFHG / GPFA

6 July - Handover to the new British Defence Attaché, from Air Commodore Tim Below to Brigadier Al Veitch at the UK Ambassador's Residence, Paris.

18 June - "l'Appel" 82nd anniversary of General Charles de Gaulle's BBC broadcast to the people of France establishing the intention to support Britain and fight on. 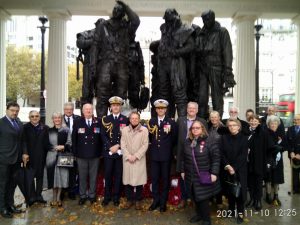 13 October - Major Commemoration of No. 346 "Guyenne" & No. 347 "Tunisie" RAF Bomber Command / Armée de l'Air at Base 106, Merignac, Bordeaux. (the base to which the two heavy bomber squadrons (RAF Elvington) returned to a liberated France in October 1945).

Formal presentation of a part of Halifax "L for Love" which was discovered at Wersten near Dusseldorf in 2019 and returned home 77 years later. (see https://afheritage.org/tha-man-who-fell-from-the-sky-l-for-love-part-i)

15 September - Battle of Britain Commemoration, Arc de Triomphe, Paris. "Ravivage" - relighting of the flame of the Unknown Warrior with Mdme Geneviève Darrieussecq,  French Minister for Remembrance & Veterans; British Ambassador HE Menna Rawlings & Air Marshal Sir Graham Stacey RAF.  The event was attended by representatives of other nations and was accompanied by troops and orchestra of 2nd Blindée (Armoured) Division "Lcclerc" (the French division which liberated Paris in 1944).

A following event at the British Embassy included the presentation by the British Ambassador to France of the British wartime medals to the family of former French Battle of Britain pilot Yves Biere who was KIA in 1941. (see end of: https://afheritage.org/the-battle-of-britain-80th-anniversary ) and the M.B.E. to the AFHG Director.

18 June - Annual commemoration, at General De Gaulle's former wartime, Carlton Gardens, London SW1, of his BBC Radio broadcast to the people of Occupied France on 18th June 1940, fundamentally establishing the committment to fight on as Free French.  (limited due to pandemic).

22 to 29 January   The Night of Ideas on-line Souvenir français - www.nightofideas.co.uk/whats-on

30.11.20 - Luc sur Mer - Trophy for local investment awarded by the President of the Calvados Region for the creation the Memorial Square and Memorial with the Hommage to the British 46e Commando. This award decided by the Mayors of Calvados is a great honour for the Maire and Luc-sur-Mer.

11.11.20          Many commemorative events were cancelled due to pandemic restrictions including the annual AFHG/GPFA events at the Bomber Command Memorial in Green Park, London and at the RAF Club.  Smaller and restricted access events still took place at war memorials.  Here in the City of York, the unique AFHG wreath (British & French roundels combined) lays alongside those of regional and national regiments, squadrons and services.

19/20.09.20  Battle of Britain 80th Anniversary Walk following the historic coastal route near Manston to finish with a presentation at Hawkinge. 09.00 Manston museum & airfield memorials - commence at 10.00 from Sandwich. Contact: https://freedomtrailtreks.com/