A Poet’s Tale. Through no other reason than by being born at a specific time and place, destiny called.

André was born in the City of Limoges in west central France on 28th September 1920 and was schooled nearby in the small town of St Junien. As for many people born at that period, like his father before him, he was to take part in a world war. 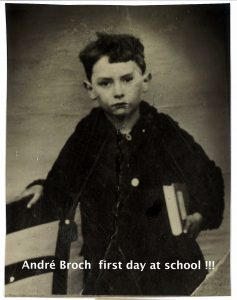 André was by his very nature a poet, but also an artisan of a wide range of disciplines eventually becoming an award winning potter, although is real passion was painting in oils. During the traumatic periods during World War II he spent what private time he had available in writing poetry and a new book “Elvington Echoes”, in French and English, tells the story of this highly creative and passionate airman through the writings he made at that time and immediately thereafter as the extent of the events became unfolded. 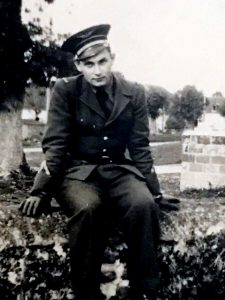 André joined the French Air Force at Tours in November 1938 at the age of 18, but before he was able to fully qualify, the invasion of France in May 1940 forced the Armée de l’Air to retreat to North Africa with their aircraft, in order to re-group. Having just arrived the French Government then agreed a conditional Armistice with the Germans on 22nd June, so André spent this time in the Vichy controlled regions until the Allies liberated Morocco and Algeria following Operation Torch, in November 1942.

Sections of the liberated French Air Force initally helped the RAF to finally conquer Axis resistance in North Africa and then were eventually able to sail to Britain and join with the Royal Air Force or the new Free French Air Force squadrons flying from airbases across Britain. André’s technical flight training continued and in October 1944 he was qualified as a navigator, eventually joining 346 “Guyenne” Squadron based in Yorkshire and flying Halifax four-engined bombers. 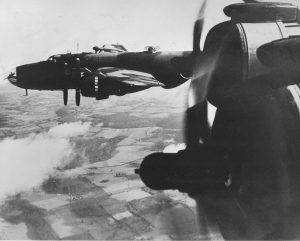 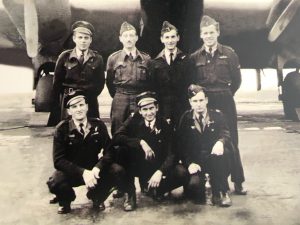 Navigator, Flight Sergeant André Broch (top 3rd from L) with his crew in 1945.

Following the Liberation of France, the French squadrons returned to their base at Merignac near Bordeaux from October and in December 1945 André was demobbed.  His love for writing and prose led him to become a renown book publisher in Paris, where he lived with his wife and two daughters. 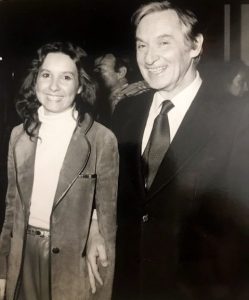 André and his daughter Caroline in 1985

In the 1970’s along with his parents, he bought a house in St Junien, Haute-Vienne (where he went to school) and in retirement was able to indulge in oil painting where he soon developed an abstract style of his own under the pseudonym of “Korine”. 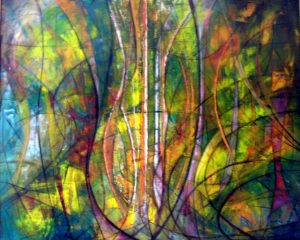 Painting by André Broch under his nom d’art “Korine”

The vibrant colours and strong lines within many examples, which still adorn the house today, are a reflexion of his experience as a mild mannered and kind individual living through an age of terrific upheaval and violence

St Junien is located next to the smaller town of Oradour sur Glane which is infamous as the site of the cold-blooded massacre of 642 men, women and children by the 2nd NAZI SS Division “Das Reich” on 10th June 1944.   St Junien had been the original target, but was considered too large, so the smaller neighbouring town was chosen for this barbaric act. The haunting memorial of this once vibrant little country town, with shops, schools, restaurants, garages and tramway, left exactly as it was following the massacre serves as a reminder today of the horror of the events of WW2. The location also inspired André in his art which, along with his own experiences, served to add a passion to his writing. 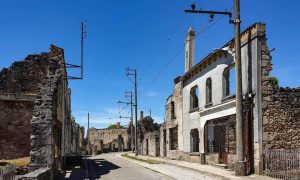 This is a personal story, but one which strikes a chord with many generations who, despite their own particular abilities, through no other reason than by being born at a specific time and in a specific place had their destiny marked out before them.  The book “Elvington Echoes” (in English & French) with verses, unique photographs and background history.

Available direct from Caroline Broch on: caroline.broch@free.fr,  price £12 + postage, or contacts us at: https://afheritage.org/contact 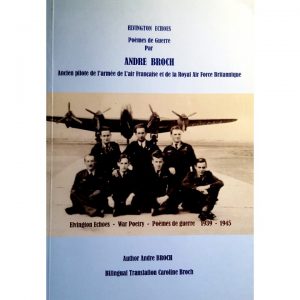