A proposed new memorial for a classical French Château with a unique wartime past near the D-Day beaches of Normandy. 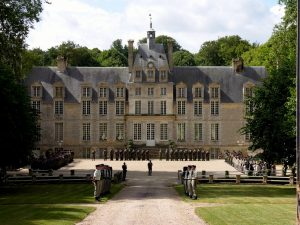 Château Lantheuil in Normandy has a significant historic past.

In the mid 17th century Jacques Turgot de St Clair built the château in the style of Louis XIII with further extentions by his son just before the end of the century. Anne-Robert-Jacques Turgot, Baron de l’Aulne, became Administrator for Louis XV and famously served as the Comptroller General of Finance for Louis XVI until 1776. Today, the interior reflects the period when it belonged to Marshal Mouton, Count Lobau, aide-de-camp of Emperor Napoleon 1st and hosted the likes of Bonnie Prince Charlie, Maria-Theresa of Austria, Napoleon Bonaparte, the Duke of Wellington, Emperor Napoleon III and Field Marshal Bernard Montgomery.

In the journal of the late Comtess de Naurois she notes: “The noose was tightening around Caen and it was in the Grande Bibliotèque one evening that a meeting was held with all the generals encamped on the property and in the neighbourhood, under the control of Montgomery”.

Grand Library at Château Lantheuil.  In this room Field Marshal Bernard Montgomery, “Allied Land Forces Commander for the Invasion of Europe”,  briefed his generals before the Battle of Caen in 1944. 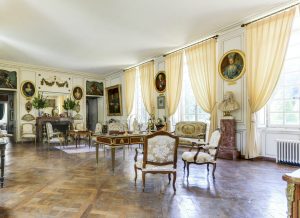 In the 20th century its strategic location meant that ir was first commandeered by the German Army during the Occupation of France in 1940.

……and in June 1944 its location was chosen for an emergency landing strip for British and Canadian fighter planes during the Allied D-Day landings. 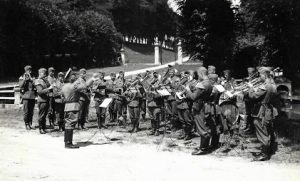 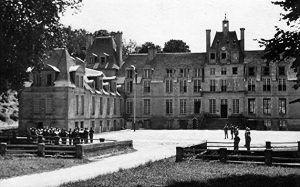 The château remains in the hands of the Turgot family to this day (Association des Amis du Château Lantheuil), and to mark this significant event and especially in support of the new British D-Day Memorial at Ver sur Mer (11km / 6.8 miles away), Baron Christian Durandy de Naurois-Turgot and his family plan to build a new memorial to commemorate the end of World War 2 and the allied air forces which took part in the Liberation of Europe. 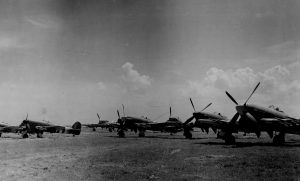 60 Typhoon fighters of the 143 Wing, Royal Canadian Air Force, operated from the airfield (ALG B9) at Château Lantheuil, in preparation for the battle for the city of  Caen. 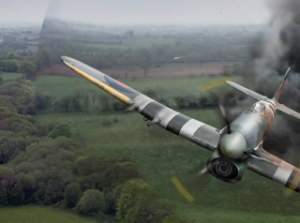 The Hawker Typoon was one of the most successful ground attack fighter aircraft of WW2, with speeds over 400 m.p.h., fitted with multiple cannon, RP3 rockets or bombs.

The family are keen aviation enthusiasts and are presently working to replace the landing strip for the encouragement of historic aircraft activities but, the  first priority is to create the monument….

The “Wings of Peace” Memorial

To be inaugurated at the 76th anniversary of the Victory in Europe Commemoration event on 7th, 8th and 9th May 2021, including a WW2 aircraft rally and show at Château Lantheuil. (see end for event plans and programme)………

“ We intend to grant free public access to the monument. We think it is important to commemorate the past and to make art and history accessible to the general public. Not only shared history but a shared future – especially in these times of separation. It is a message of hope and peace.”

The 4 metres high “Wings of Peace” memorial would be in polished stainless steel is to be created by British artist Samuel Zealey whose works can be found nationally and internationally. He has won the Deutsche Bank Award for Creative Enterprises, the Broomhill National Sculpture Prize and was winner of the Spitalfields Public Sculpture Commission Award as well as the Gateway Public Art Commission to create the “Jenga” type art piece  outside Bracknell Railway Station, entitled “Onyo”. 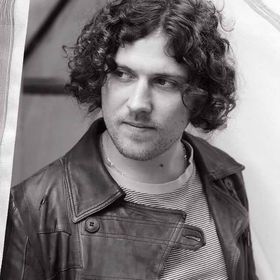 For the past 40 years or so, the ever-increasing scale of modern and contemporary sculpture has moved this practice from the private to the public sector; towards a re-evaluation of its relationship with architecture and the natural world. This relationship results in a more evocative ‘public art’ which embodies the spirit, meaning and purpose of art in the first place.

Samuel Zealey sees his sculptural work as part of this ongoing and complex conversation, whilst also highlighting the challenges our current environmental climate faces and the moralistic issues brought about by contemporary technological advances.

His sculptural works combine playfulness of form with precise engineering and a highly developed material sensitivity. The works radiate a lively aesthetic, alert to the ways in which art and creativity can engage with questions about culture, technology and sustainability.

A body of work Planes centred around a folded steel plane aesthetic — a set of sculptures representing an exploration of the polarities between weightlessness and gravity. These scaled-up paper planes toy with the material contrast between paper and steel. Calling to mind the pleasure of making objects from industrial materials, the translation from one to the other creates an incongruous tangibility that the metal could be worked and re-worked in the hand like origami. This series typifies a preoccupation in his work with principles drawn from physics and engineering and a counter-intuitive use of materials to provoke questions about balance, equilibrium, weight and form. 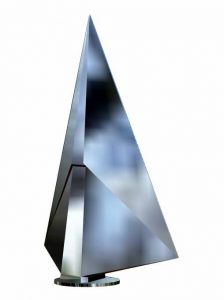 A design for the proposed “Wings of Peace” memorial to allied air forces.

In this strange time when countries are looking to isolate themselves, is when humanity should be trying to unify on a global scale to combat worldly problems. In this time it is worth while to take a step back to get perspective and reflect to remember what is important within life.

France and the UK has had an eccentric relationship over histories past, but when these two nations have pulled together we demonstrate and create what people think is the impossible, such as the Anglo Franco collaboration developing Concorde.

The piece of monumental sculpture “Wings of Peace” that my studio will be developing is going to be purpose built for Château de Lantheuil, showing respect to all the honourable fighter pilots of World War II. With this piece I also wish to homage our nations (France / UK) engineering marvel – developing the first supersonic commercially operating commuter aeroplane. Together we touched the stratosphere not in cramped space modules but in complete comfort whilst travelling over mach two.

I, myself, am very passionate about both the airmen and airwomen of World War II as well as Concorde on a very personal level because I have had family that served as officers in the RAF and my father who is an aeronautics engineer was apart of the Concorde team developing the project through to realisation.

The project: For the past couple of years Studio SZ has been perfecting the body of work known publicly as The Plane Series. My studio has recently started to work closely with Studio AKW, a London based design studio which has brought a new dynamic edge to the development of my projects.

To date pieces from The Plane Series have been fabricated for project in the UK, US and Mexico. Grounding one of these piece in France as a permanent open-air intervention between classical architecture and modern sculpture to homage the airmen and airwomen that served in World War II for this 76th Anniversary celebration of VE Day will be very moving indeed.

Past works of this series have all been made out of a material called Cor-Ten which is a type of steel designed by the US for building oil-rigs out at sea because of its structural and material strengths.

For this project we will be using a mirror polished stainless steel (316) for the sculptures surface aesthetic. This material will reflect and interact beautifully with the countryside environment the Château is located within. The piece will deliberately blend into its surroundings because of all the considerations put into place with regards to designing and developing this monument to our recent history.

Following completion of the design strategy the plan is now to raise £40,000 to complete the sculpture and seek further sponsors & partners for the rest of this unique and spectacular project.

World War II Aircraft Rally with Static Aircraft and Airshow, plus
Inauguration of  « The Wings of Peace » monument.

This event is planned to take place every year and to be focused around the World War II Aircraft Rally.

The first event will take place on May 7th, 8th and 9th, 2021 on the occasion of the commemoration of the end of the war in Europe on May 8th, 1945 and to inaugurate the “Wings of Peace” monument, raised to the memory of those heroic aviators of WWII. To mark this moment in history, we are inviting high level representatives of the principle Allies of Britain, France, Canada, USA and Russia and representatives of their respective air forces.

Our intention is to invite other countries in subsequent years.

Operators of period aircraft from France, the USA, UK, Canada and the Russian Federation will be
invited to land on a specially developed landing strip on the Estate and the gathering of single-engine and twin-engine vintage military aircraft will be supplemented by modern fighter aircrafts fly-pasts.

The first day (May 7th) will be used for the arrival of the vintage aircraft in the morning and will
be opened to the public in the afternoon.
May 8th will include  the inauguration of the monument with public events throughout the day.
May 9th will be open to the public, with an airshow, flypasts, rides in military vehicles and in the evening, a possible projection of films and video-mapping on the facade of the castle with Fireworks

To achieve this, we are currently working to build an airfield, consisting of:
1- A main EAST-WEST track with enough space at each end to turn around. It will be of
0,925.km long, plus 60m on each side for security, 50 meters wide and 10m from the hedge and is
south of the estate.

2- A shorter secondary track oriented NORTH-SOUTH will be of 500m long and also 50m
wide to allow both a NORTH-SOUTH landing according to aircraft categories and wind orientation
and to allow the taxiing of aircraft to lead up to the parking area in grass (see rectangle) situated
closer to the château.

3- A parking area for aircraft closer to the Chateau
In addition, a large area will be reserved for the duration of the event for military camps to be used
by service units and pilots (dormitory tents, meals, officers’s area, meetings, flight directors, etc.).

5- Area for the Monument

New runway and layout of grounds: 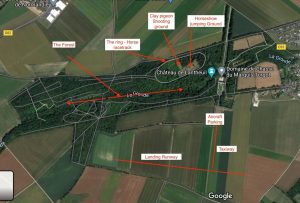 The Project is fully supportive of the British Normandy Memorial at Ver sur Mer, (Architect – Liam O’Connor),  (https://www.normandymemorialtrust.org/) which is completed now and will be officially inaugurated on 6th June 2021.

If you are interested in being part of the event project at Château Lantheuil or wish to receive further information, please contact us.