Looking for crew relatives of HP Hampden L4194, “ZN-B” of 106 Sqdn, Finningley for the 80th anniversary in France. 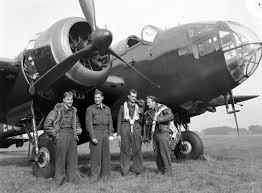 Two commemoration are being planned at Vannes and at Pluneret in Brittany on Sunday 22nd November 2020 to commemorate the 80th anniversary of the deaths of 4 British airmen who were flying Handley Page Hampden L4194 of 106 Squadron RAF based at RAF Finningley, which crashed at Pluneret following a mission against the military port of Lorient. 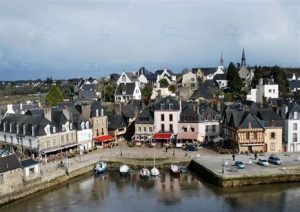 The town of Pluneret in Brittany today

It is probable that L4194 was the first RAF aircraft to be shot down in Brittany but it’s loss and those of the 4 British airmen has gone almost unnoticed until now and the Mayors of Vannes and Pluteret are anxious to trace any living family members.

If you know or have any information regarding the living relatives of any of the four airmen listed at the end of this article, please do not hesitate to contact us at: info@afheritage.org

This will be the first ceremony for the 106 Squadron airmen, who died in the early days of the War, and the town wishes to commemorate them and all those other British combatants who fought to liberate France. The proposal is to invite the families to the two ceremonies they are planning for the 80th anniversary of their sacrifice on 22 November, 2020, at the Military Section in Vannes main cemetery (location of the graves) and at Pluneret, 56400 (place of the crash). The event is organized by the town of  Pluneret supported by Souvenir Français and the British Legion. 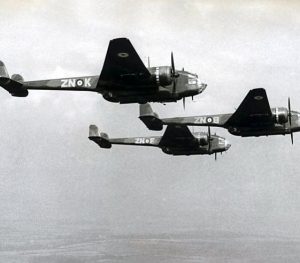 The Story of the Crash

On the night of 22-23 November 1940, five Armstrong Whitworth Wellington aircraft of RAF Bomber Command attacked the port of Lorient in Northern France, whilst three Handley Page Hampdens from 106 Squadron based at RAF Finningley in Yorkshire dropped sea mines into the entrance of the harbour.

Of the three Hampdens:

L4194 “ZN-B” took off at 17:10 crossed the French coast between Le Touquet Plage and Dieppe and headed for Rennes and then Belle-Ile.

At around 19:30, after descending to drop their 600kg mines at a height of around 700 feet it was hit by German anti aircraft flak and caught fire. It made a 160-degree turn and quickly ditched a mine in Bellego Quarry at Kerroussin, but hit a line of trees at Le Croix Percée near the town of Pluneret where it caught fire and exploded. All four crew members were killed.

The Germans, tried to move the 5 tonne fuselage of the plane but it eventually required a local farmer Jean René with his draft horses to complete the operation. The German then ordered that the four crew members be immediately buried on the site. Later, their identity was placed in a bottle with a French tricolor flag on the graves and to this day no one knows who did this. A cross was erected which read “Here are four English airmen killed on 22.11.40, aircraft L4149“, and during the Occupation this burial site was frequently adorned with flowers and visited by local inhabitants, despite the risks from the occupying forces. 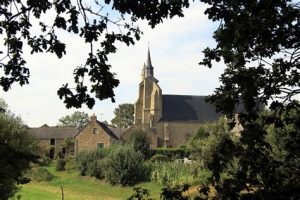 Georges Le Mer, who later found parts of the aircraft now on display in the museum at Morbihan, remembers that as a schoolboy, the nuns of Saint Anne d’Auray, organized visits to the scene of the crash as a moment of passive resistance and a tribute to the British aircrew.

The death of the four airmen was finally confirmed by the Red Cross at the end of December 1940 but it was only in November 1946 that the families officially learned that they were resting in Vannes.

On 27 June 1945, their remains were exhumed by a Royal Air Force research team and transferred to Boismoreau Cemetery in Vannes, where they have been since, (alongside the five crew members of the Wellington BJ768 of 142 Squadron which crashed on 8th November 1942 at Grand Champ).

CWGC graves of RAF Aircrew at Boismoreau Cemetery in Vannes

The airmen of Hampden L4191 were the first to fall in this region – the first killed in a long list between 1940 and 1944, from the 650 Allied aircraft that were shot down in and around the coast of Brittany. 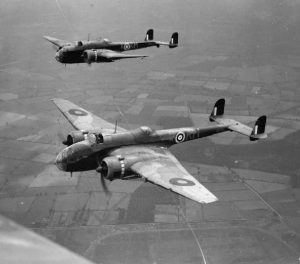 At the beginning of the War the RAF suffered very heavy losses of aircraft and crews. Many British aircraft types were obsolescent and initial raids consisted of simple “Nickel Raids” dropping leaflets and propaganda in a still vain hope of stopping total war. In addition the RAF did not have the operational experience which the Luftwaffe had obtained in Spain.

In November 1940 Britain was still at a low ebb having suffered continuous raids and losses of experienced airmen during the Battle of Britain throughout the summer, the debacle of the defeat of the army at Dunkirk and the huge losses of men ships and material to the submarine war in the Atlantic.

As Britain stood alone, the Government was very anxious to maintain public confidence despite the devastating news coming from all sides. News of losses at this time were kept from the newspapers to avoid losing control of the War. As an example, on 17th June the Cunard liner RMS Lancastria had been sunk in front of Saint Nazaire with the loss of more than 4000 soldiers – the largest maritime disaster in British history, yet the survivors were ordered not to talk about it and a legal ban on British newpapers preventing the printing of any details,was made. The story was eventually revealed by the New York Times on 25th July (the USA was a neutral country at this time).

Nevertheless there remained a reluctance to publicise losses and with almost 5 years of grueling war ahead, the loss of Hampden L4194 gradually fell into obscurity, until now.

If you know or have any information regarding the living relatives of any of the four airmen listed below, please do not hesitate to contact us at info@afheritage.org 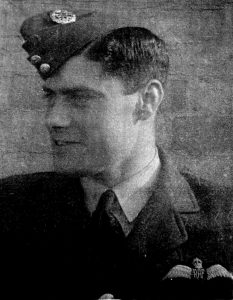 WARD John Montague  Sgt. Pilot, 742466, RAF (VR), 106 Sqdn. Age 20.
Born on 20 December 1919, at Winshill near Burton-on-trent he was the son of Charles Arthur and Nelly WARD, of Winshill, Staffordshire. After secondary school he found an office job in one of the famous breweries of Burton-on-Trent. He loved hiking in the countryside and was “an intelligent, well-behaved, determined young man. Obviously he didn’t lack courage,” recalls his brother Benjamin. In 1938 he joined the Royal Air Force Volunteer Reserve.

“Monty” Ward began training on weekends and made his first solo flight in May 1939 and was mobilized in September 1939 obtaining his full pilot’s licence in the spring of 1940. He was then assigned to No. 106 Squadron RAF on 19 September 1940. 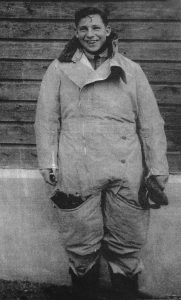 Son of Ernest Edward and Evelin Annic HULL of Bedford, he was the second of three children. During his studies he was an active member of his school’s track and field team and joined the Royal Air Force in 1938.

The four crew members were buried on the spot on the orders of the Germans. Their identity was placed in a bottle, (photo 11) a tricolor flag on their remains. The author of this gesture remains unknown. (**)

The first production Hampden flew in May 1937 with eventually 1432 examples being built by the Handley Page Aircraft Company. Nicknamed the “flying suitcase” or “flying stove tail” its defensive armament had been sacrificed in favour of performance and load carrying capabilities which was just under 2 tonnes or one 18 inch torpedo and a capability for under-wing bomb racks . Its armament consisted of a fixed Lewis -303 machine gun on the upper side of the nose canopy, with twin .303 guns in the upper dorsal turret and a underside turret, behind the bomb bay, with another twin .303 machine gun.

The Hampden was powered by two 1000 hp Bristol Pegasus VIII engines with a maximum speed of more than 230 mph and a maximum height of 19,000ft.