On behalf of our colleagues at the Gallipoli & Dardanelles International based in UK, Ian Reed attended the ceremony at Port Maillot in Paris for the 100th anniversary of the formation of the  “Association des Anciens Combattants des  Dardanelles”, on 18th July 1920,  which today is called “ l’Association Nationale pour le Souvenir des Dardanelles et Fronts d’Orient“, to include the subsequent French missions in the Far East. 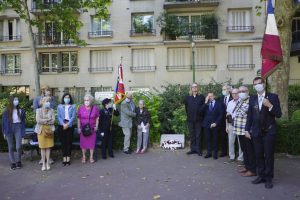 The Group in attendance consisted of children and grandchildren of the French combatants who fought alongside the British Army and Navy in 1915 and along with Gallipoli & Dardanelles International, was also supported by representatives from La Union Nationale des Combattants. 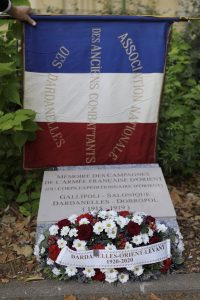 The Gallipoli & Dardanelles Campaign (17 February 1915 to 9th January 1916) took place during World War 1, in an attempt to keep supply routes open to Russia who were struggling to maintain the Eastern Front against the Central Powers of Germany & Austria which included the Ottoman Empire (Turkey). Failure of the Eastern Front meant millions of more troops available to face the Allies in the West.

The Dardanelles Strait is the narrow sea lane between the Mediterranean and the Black Sea.

The Allied Landings were led by Britain in an attempt to hold the sea routes but resulted in eventual failure.

The Turkish Army of the Ottoman Empire figure was approximately 250,000 in total. 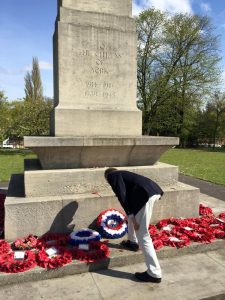 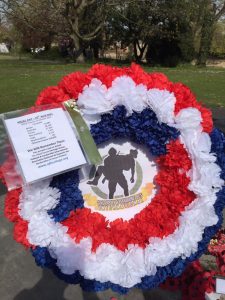 Amid the COVID-19 restrictions, our Director, Ian Reed laid a wreath on behalf of AFHG and Gallipoli & Dardanelles International at the City of York War Memorial – Sunday 25th April 2021.