A mission to secure the memory of 46th Royal Marine Commando on D-Day and the part played by his father. 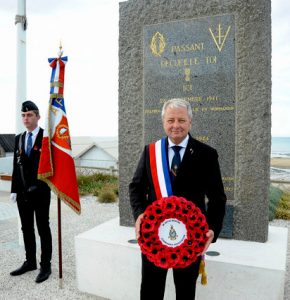 Three years before D-Day, a discrete landing took place at Luc-sur-Mer, named “Operation Chopper”, on the night of 28 September 1941 by 5th Troop No.1 Commando led by Lieutenant Tom Gordon-Hemming, in order to survey the Normandy coastline and beaches in preparation for a future allied landing. In this early foray into Occupied Normandy two British  soldiers were lost and are buried in the local cemetery.

2¾ years later, on the morning of Tuesday 6th June 1944 the Allied Landings along the Normandy coast began, and Luc-sur-Mer on “Sword Beach” was liberated by 4th Special Service Brigade Royal Marine Commando as part of the 3rd Infantry Division with 1st South Lancashire Regiment 8th  and 3rd Infantry supported by Sherman beach clearing “flail” tanks of the 22nd Dragoons. 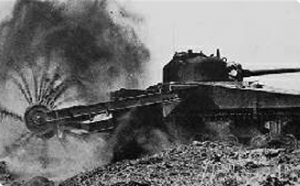 At 8pm that same night elements of the German 21st Panzer Division supported by 716th  Infantry Division counter-attacked the British positions and it was not until the following morning when the last remnants of German resistance at Le Petit-Enfer (Little Hell) was overcome by 46 with support from *RM Armoured Support Group, that Luc sur Mer was finally back in Allied hands.

From BBC Peoples War, Jack Farrell who was with the Dragoons comments: “The beach was littered with various tanks and other vehicles, burning or broken down and there was obviously still a lot of shelling and there was an aircraft bombing. This Luc-sur-Mer was just like a small village really……anyway, it was all arranged that we all ‘harboured-up’ with the tanks in this field as soon as we got ourselves organised.  So our crew commander, a lieutenant, got off the tank he got a piece of shrapnel in his face or something and straight away he fell down. I forget his name now, but that was the last we saw of him. A little while later, our (replacement) crew commander a chap called Tom Horne, he also got wounded with a similar shrapnel injury. So, we lost two wounded in a short space of time”.

Today, alongside the beach in the peaceful Normandy resort of Luc sur Mer stands a British and French flag beside a monument to that fateful time in June 1944 when the Allied landings took place.

Simon Horsington’s father was a member of Special Services, 46 Commando Royal Marines (46) who were to take part in the initial landing operations codenamed “Deer” for the Houlgate Coastal Defence Battery or “Frog” for the Benerville C.D. Battery on the night of D Day or D Day +1. The final decision for the operation was to be made on D Day itself and, although under British Second Army command, the decision to be made by Naval Commander Eastern Task Force and the army Commander.

On the fateful day “46” were waiting at “Sword” anchorage at Ouistreheim, when the order came postponing both operations and was described after the War by a Royal Navy Officer as ‘The Suicide Mission’, which it would have been. Postponement was made because the German gun batteries were not harassing our shipping and subsequently “46” was ordered to land as soon as possible in the British/Canadian sector of “Juno Nan White” at Berniéres.

They immediately proceeded to the HQ of 4th Special Service Brigade at St Aubin sur Mer (41, 46,47,48 ) and ordered to capture the strong point at Petit Enfer to secure the coast from Langrune sur Mer, Luc sur Mer and beyond. 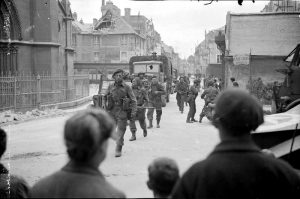 The attack began 13.30h and all resistance ceased 18.00h. 65 prisoners (716 Infantrie-Division) were taken plus a considerable quantity of weapons and equipment. “46” suffered no casualties (although eventual fighting through to September towards the Dunkirk area lost 48% of its original complement of 360, dead wounded or taken prisoners of war). 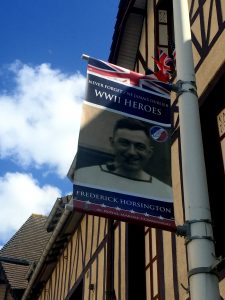 Each year Simon has made a special point of supporting this liberation commemoration alongside the people of Luc sur Mer with “46” veterans, families and friends. For the 75th anniversary in 2019 a large gathering took place and Simon made an impassioned speech (in French) before the Mayor and townsfolk at their annual commemoration. The Town had placed large photograph images of some of the men who took part in the liberation. One of the images was Simon’s father. 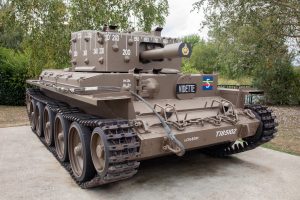 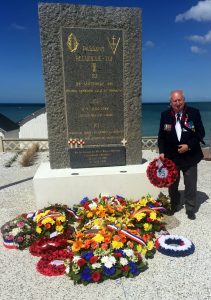 Simon Horsington by the Memorial to the landings at Luc sur Mer, June 2019. 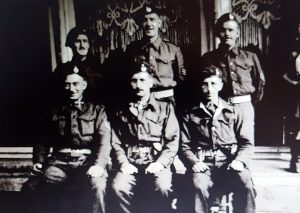 The Trophy for local investment by the President of the Calvados Region for creating the memorial square and Memorial with the Hommage to 46e. This award decided by the maires of Calvados is a very great honour for the Maire and Luc-sur-Maire.