Presentation of a “Special Duties” Westland Lysander to France at the Hôtel des Invalides, Paris on 26th January 1946.

New Project:  In August 2020 plans were first conceived to re-enact the special commemorative event which took place in 1946, but has remained on hold due to the pandemic. The idea however is still very much alive.

In May 2018, Air Commodore Tim Below (British Defence Attaché to France) and Ian Reed organised the “100th Anniversary of Close Co-operation between the Royal Air Force and and the Armée de l’Air” at the Hôtel des Invalides in Paris. The event conincided with the international celebration of “RAF 100”.

The event was the first time in 72 years that aircraft had been on display in the most prestigeous military site in France and the extraordinary success of the event led them to consider commemoration of the last event which had taken place there in 1946.

The vital part played by the British Special Operations Executive (S.O.E.) who collaborated and organised French Resistance from the start of the War had been commemorated by the presentation of an iconic Westland Lysander. The short take off and land, high-wing monoplane, which had exemplified covert missions into Occupied France through the War. 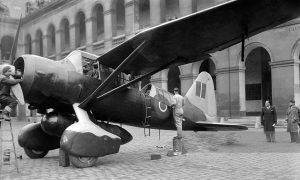 Preparations for the commemoration in 1946

On 27th January 1946 a former No. 161 Squadron RAF  (Special Duties) Lysander,
V9614 aircraft was formally presented to France by the British Government to commemorate the important wartime role of the incredibly brave British & French agents and Resistance members who fought in the clandestine war from within Occupied France.

The presentation ceremony at the Hôtel des Invalides, in Central Paris was accepted by the French Government.  Those in attendance included:

Officers and men of the Royal Air Force, the Armée de l’Air and the Garde républicaine were in attendance as were former resistance members, S.O.E. agents, pilots and civilians including Major Antony Bertram, Philip Schneidau and Yvonne Baseden, who had planned and undertaken the clandestine missions in or out of France during the war.

The internal resistance against the German Occupation of France became a major source of intelligence for the Allies, and the sabotage of important supply routes, railways and industrial targets from within had a significant effect on German control and deployment of resources. However there were many separate organisations within France operating independently due to differing politics or locations. Drawing them all together into a cohesive effective organisation was to focus operations almost until the end War.

In London the Secret Intelligence Service (SIS – inaccurately known as MI6) sought to utilise the disparate groups across France. The Special Operations Executive (S.O.E.) was formed on 22nd July 1940 and its “F-Section” was devoted to supporting resistance France.

During the uncertainty of the days following the invasion of France and the formation of the French Government at Vichy, “F-Section” based at 83 Baker Street, London, operated across the whole, highly complicated, political spectrum within France. In those early days following the fall of France, the future of General De Gaulle’s “Free French” organisation was still uncertain and so an independent “RF-Section” of S.O.E. was formed to work specifically with De Gaulle’s secret service which had been formed on 1st July 1940. It was eventually called the Bureau central de renseignement et d’action (BCRA). The BCRA had several name changes over the years, eventually becoming in 1982, the DGSE, France’s national intelligence agency.

Of the 200,000 French citizens who died in NAZI concentration camps, 75,000 were resistance operatives, plus over 20,000 were killed (or murdered) in action. Only 18 agents of F & RF Section’s agents survived the war. Special agents were especially treated with barbarous cruelty by the NAZI’s. 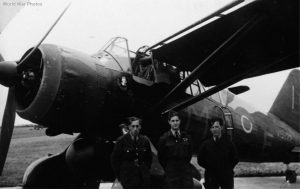 The requirement to get agents in and out of Occupied France and to supply materials for SOE and Resistance groups eventually led to the formation of Flight 419 (Special Duties) formed on 21st August 1941 operating out of the fighter station at RAF North Weald. Its first mission was undertaken on the night of 19/20 October 1940, although the very first secret mission into France was undertaken by an Army Cooperation Unit Lysander on 3rd September 1940. . On 25 August 1941, the Flight was expanded and became 138 (Special Duties) Sqdn RAF. By the end of the war 138 Squadron had flown more than 2,500 missions, dropped 29,000 containers, 10,000 packages and 995 agents into occupied Europe, whilst losing 70 aircraft 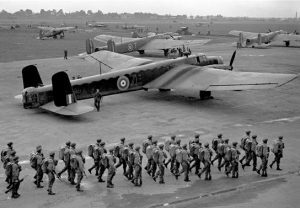 161 (Special Duties) Sqdn RAF was formed at RAF Newmarket on 15 February 1942 with Lysanders from 138 Squadron and some Whitley and Wellington medium bombers plus aircraft from the Kings Flight. A month later, in March 1942, the squadron was moved to the secret airfield at RAF Tempsford, where it remained until the end of the War. Lysanders began their missions at the forward air base of RAF Tangmere in order to extend their range. The majority of supply drops and agent drops were still handled by 138 Squadron but 161 Squadron did all the extractions of personnel as well as delivery of S.O.E. agents as well as political leaders, resistants plus the occasional evading airmen. 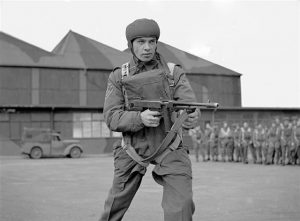 Training initially was done at ‘F’ section, nicknamed “Joe’s School” at RAF Tempsford with the help of pilots from 161 Squadron. Agents were often French expatriates living in Britain, or were resistance members brought back to Britain. Some had been airmen within the Armée de l’Air. Only the pilots knew the details, not even the mechanics were aware of the passengers.

By the end of the war the two squadrons had ferried hundreds of secret agents and picked up over 600 French political leaders, resistance agents, family members, plus some escaping RAF or USAAF airman. The political and strategic importance of these operations was undeniable for both the progress of the War, its eventual outcome and the post war period. The first leader to travel to London via this route was Christian Pineau, of the Libération-Nord network, a largely socialist group which eventually became one of the most important resistance groups of the War. 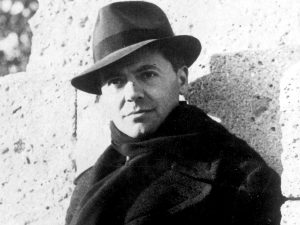 In February 1943, the Resistance groups began to splinter due to internecine and fundamental political differences within France. Holding the allies together fell to people like Jean Moulin who was flown into France on “Operation Eclipse” to draw together these disparate groups. In achieving success, at the cost of his own life, he ensured de Gaulle and the Free French maintained central control of events thereafter, ensuring that there was a strong central leadership to run France and which the Allies could deal with at the end of hostilities.

The Lysander had suffered huge losses during the Battle of France in May and June 1940. Of the 157 in action during this period as reconnaissance and artillery spotters, 118 had been shot down and it was considered unsuitable for coastal patrol, being too slow and unmanoeuverable. It also had a large wing and was heavy for landing on soft ground. Despite this Lysanders flew dawn patrols along Britain’s eastern coastline throughout the remainder of 1940 in anticipation of a German invasion. 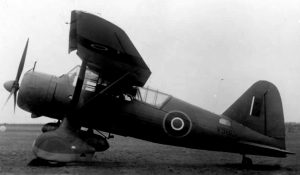 The great benefit for its new role in ferrying secret agents was that it had an exceptionally short take-off and landing requirement and an ability to fly low, with excellent visibility for the pilot. Some modifications were made including an extra 150-gallon fuel tank underneath the fuselage, extending its range to 1,150 miles. The Lysander’s small bomb racks, radio and machine guns were removed.  and a rearward facing bench and “shelf” for 3 passengers was installed and a permanent ladder was fixed to the fuselage. The “Special Duties” aircraft were eventually painted matt black. 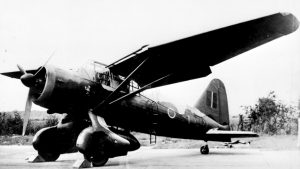 Operations generally took place within a week of the full moon, which was necessary for the pilot who flew with no navigational equipment except a map and compass.

The areas agreed for the secret rendezvous points with the Resistance were sometimes former grass landing strips used during the First World War, of which the Germans were unaware, or clearing close to roads and villages. Others were specially concealed clearings within woodland well away from towns and villages.  When the aircraft was heard overhead the Resistance would flash a prearranged Morse Code signal. The aircraft would flash a corresponding letter using a downward facing light. The field would then be illuminated using lights placed in an “L” pattern to mark the drop target or torches and car headlamps to mark a landing strip.