Another deadly night for Bomber Command – two Frenchmen search for two of the 42 Lancasters lost over their town on one night.

On the night of 3/4 May 1944 two RAF bombers were shot down and crashed at the village of Trouan le Petit in the Department of Aube, France. The aircraft were part of a much larger story, and the local townsfolk wish to know more about the 9 British, 3 Canadian and 1 Australian airmen from the two aircraft who are buried together at their cemetery of St Pierre and St Paul, in order to create a fitting memorial to the crew who gave their lives for the liberation of Europe.  Details of the known crewmen are listed below, and we are looking for any relative or connection to these brave young men.

But first, the aircraft and their mission……… 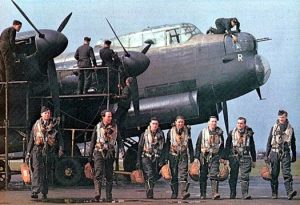 By April 1944 Britain and its allies were making advanced preparations for the invasion of Europe. Bombing missions over Germany were reduced in order to concentrate on targets which could compromise D-Day, one of which was the huge former French Army Barracks at Mailly-le Camp 130 km south east of Paris. Information from the French Resistance indicated that the base was now a major Panzer Tank training, refitting and repair depot with troops from at least 5 battalions  of tank regiments within 21st Panzer Division. 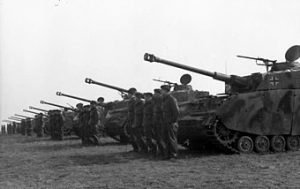 As this posed a significant threat, a raid was planned for the night of 3/4 May 1944 and was undertaken by 313 Lancaster bombers from 17 squadrons of Nos.1 and 5 Groups RAF Bomber Command, plus target marking Mosquitos from 617 (Dam Buster) and 627 Squadrons led by Leonard Cheshire and additional Lancasters formerly from the Pathfinder Force. 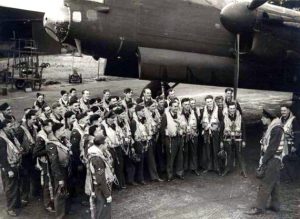 The bombers were to fly low level at around 7000 ft for more accurate aiming in order to reduce any civilian casualties in nearby villages, although the use of the 4000lb “Cookie” bombs meant that aircraft, particularly lighter target aircraft, were vulnerable to blast at tese low levels. Nevertheless the aircraft began to take-off at around 21:45 from their respective bases south of the City of Lincoln on the evening of 3rd May to arrive at a holding position in two waves at 15 miles north of the target. The first wave of Lancasters from No. 5 Group were to attack the east end of the camp at 12:01, followed 20 minutes later by the second wave from No. 1 Group which would attack the west end of the target. 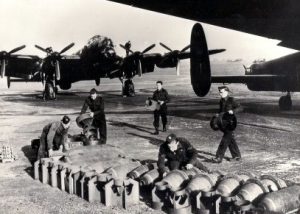 As the aircraft approached the target there began confusion with radio communications. In wartime, technology advances at record speed. HF (high frequency) radio, which was in general use, had been overtaken by VHF (very high frequency) and the target marking aircraft found that they could not communicate clearly with the main striking force.

The trick of every bombing mission was to strike fast and fly away quicker but, kept in their holding pattern north of the target, every minute was a minute too long. At least 4 Luftwaffe night fighter units were located in the immediate area, and soon they began to arrive amongst the bombers. 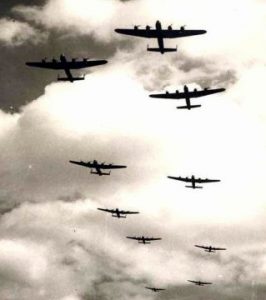 The first wave of bombers eventually moved against the target, probably at the pilots own initiative as their comrades began to burst into flames around them. They were almost 15 minutes late.

The second wave by No.1 Group aircraft followed soon after.

Meanwhile the Luftwaffe Night Fighters continued to attack the slow vulnerable bombers waiting over the assembly point and in just 30 minutes had destroyed dozens of aircraft. The Luftwaffe were able to follow the returning bomber streams almost back to the French coast and in total 42 Lancasters were lost.

Some crew members of stricken aircraft parachuted to safety and a few were able to contact the resistance and escape, but 258 airmen were killed in action. 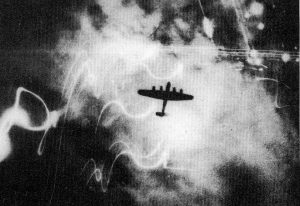 The target was thoroughly destroyed including over 150 buildings and around 100 vehicles and tanks. 218 German instructors and troops were killed and 150 wounded. The effect of the loss of this major installation and its highly experienced tank troops on the forthcoming landings in Normandy just 4 weeks away can only be guessed, but would likely have been quite significant.

Almost 260 RAF aircrew were killed in action during the mission and are buried in French community cemeteries across the region. The crews of  “CF-W” and “VN-P” who are buried at the cemetery of St Pierre and St Paul in Trouan le Petit and an annual commemoration is held at Mailly le Camp each year.

Jean Oddou & Pierre Pascal have spent many hours piecing the details together and are still searching for the details of several aircrew menbers. If you can help fill in any of the gaps to this story the town would be most grateful.

Special thanks to Mike Connock, Chairman, Friends of RAF Skellingthorpe 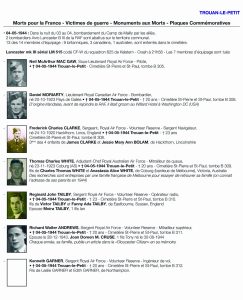 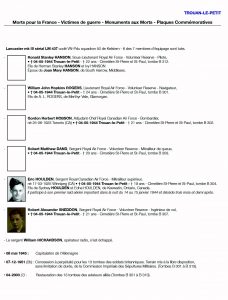