Surprise discovery in Düsseldorf in 2019 – plans for a unique memorial of reconciliation in Germany. The story goes on….

Note: Latest updated news about this project can be found at the end of this article…….

The Annual Service of Remembrance at Notre Dame Cathedral in the centre of Paris on 11th November 2018  commemorated the 100th anniversary of the end of World War 1 and especially the defensive collaboration of France and Britain from that time onward. As part of his contribution to this event, Group Captain (now Air Commodore) Tim Below, British Air Attaché, chose to tell the story of the sacrifice of the crew of “L for Love” – a French aircrew within RAF Bomber Command – as a example of French combattants fighting to free Europe alongside their British counterparts. 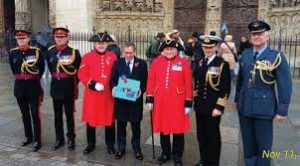 As special guests, Thomas Lesgoirres, the grandson of André Guédez (mid upper gunner) and Gilbert Bohn the cousin of Lt. Jacques Leroy (Captain/Navigator) were invited to attend, continuing to make this particular story relevant to today.

Just a few weeks later, and completely out of the blue, Ian Reed received an email from Herr Uwe Baum  in Germany. Uwe, his father Werner and friends, had unearthed the remains of an aircraft near their home at Wersten near Düsseldorf……….. 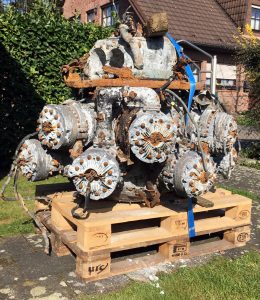 In addition, as a young boy hiding in his mother’s cellar Werner clearly remembers a bombing raid starting at around 14:30 hrs on the afternoon of Christmas Eve 1944 and later felt the impact of one huge bomber crashing, almost as if it was on top of their house.   Could this be “L for Love”? 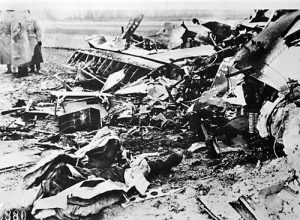 Düsseldorf local historian Thomas Boller had initiated a search to find the identity of the aircraft and traced the names of the crew through cemetery archives. Ian Reed and Geneviève Monneris, the daughter of André Guédez (see “L for Love” Part 1), worked together and researched dates, times and technical details to help confirm that the aircraft’s identity was indeed Halifax MZ489/L.

“L for Love” had been found ……….and the story was back in the news!

Uwe and his friends, the “Wersteners”, had recovered one of the Bristol Siddeley Hercules 14 cylinder radial engines and began to clean and preserve it.

From the very start they had expressed a wish to create something to commemorate not only the airmen who died but also the innocent civilians who perished during wartime – a truly commendable sentiment, and also a special opportunity in which people from Britain, France and Germany were all directly involved.

As a young boy, Werner Baum (on right) witnessed the bombing raid and the crash of Halifax “L for Love” on Christmas Eve 1944

As a young boy, Werner remembers seeing the wreckage of the Halifax and 2 further witnesses to the crash were found (all young children at the time), their testimonies confirming that there were two bodies in the wreckage. Flying Officer Jacques Leroy had stayed with his young pilot, Sergeant Louis Baillon, to help keep the crippled Halifax stable, enabling the other 5 crewmen to escape with their parachutes. 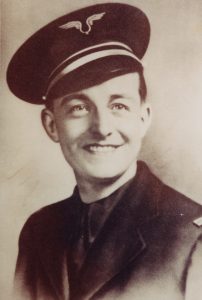 Flight Sergeant Louis Baillon (aged 26) pilot of “L for Love”, kept at the controls until his crew had jumped but died when the aircraft exploded in mid air. 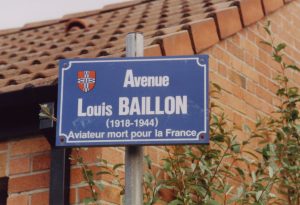 Louis Baillon commemorated in his home town of Bailleul, in French Flanders

On 24th December 2019, the anniversary of the crash, Mme Monneris travelled to Düsseldorf where she was met by the “Wersteners” and they met at the exact place where her father’s plane had crashed 75 years before. 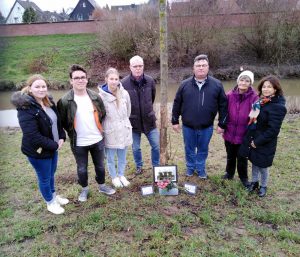 Geneviève Monneris (R) with Uwe Baum (3rd from R) with his family and friends at the  site of the crash of “L for Love” at Wersten, Düsseldorf – on the 75th anniversary – 24th December 2019.

Several newspaper articles were produced for The Rheinische Post by journalist Simona Meir and a programme by WDR TV (Westdeutschen Rundfunks) produced by Thorsten Lenze, all added to the increasing interest in this true project of reconciliation. In addition the Air Attachés at the Embassies in Berlin, Paris and London all responded positively to supporting the project. 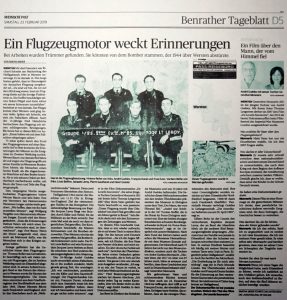 The story has received strong media interest in Germany

Following several months of correspondence with Büro Oberbürgermeister Thomas Geisel, (Mayor of Dusseldorf) and the Council at Wersten, a place for the memorial has been agreed and the design and construction of a suitable memorial is hoped to be erected 2021.

The proposed location of the memorial in modern day Düsseldorf

Upon completion this is likely to be the very first memorial in Germany to commemorate airmen of the Royal Air Force, the French Air Force and German civilians who died in the Second World War.

More project details will be added and updated here as they occur – the Story continues………..watch this space! 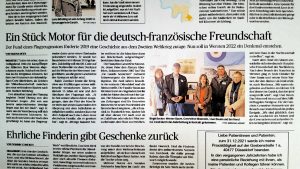 Commemoration of 346 & 347 Squadrons at their home base in France with the French Heavy Bomber Association (Groupes Lourds), veteran, families and the personnel of Base 106.

Werner & Uwe Baum and Birgitte Becker returned a part of the Halifax “L for Love” engine to its home base after 77 years, and presented it to Col. Ludovick Louriou for the Base Museum 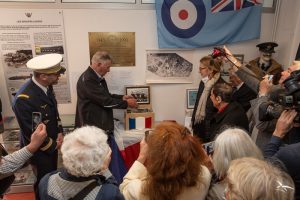 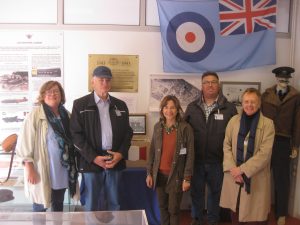 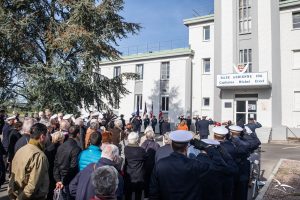 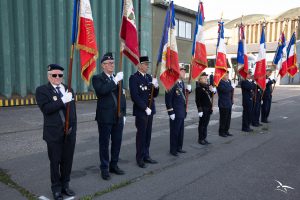 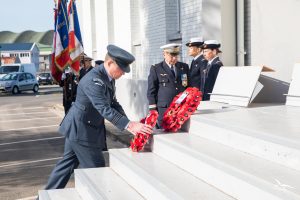 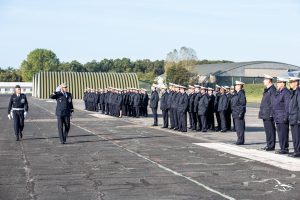 Aircraft engine from World War II becomes a monument.
WERSTEN (dsch)
On Christmas Eve 1944, a fighter plane crashed over Wersten. The engine of the English machine was found during construction work in February 2019 and held for scrap, by chance a resident, who is a hobby model builder, was able to identify the rusted metal lump. Even then, the Wersteners had suggested that the, approximately 800 kilogram piece should become a monument. The local group “Young Wersteners” had also spoken out. Now it is clear: The motor monument will come, it will stand on the road on the Rott, not far from the crash site. Originally, this request had been rejected for reasons of environmental protection. An alternative location had been advertised on the Werstener lid, but there had been concerns about the statics of the tunnel ceiling. According to initial drafts, the monument could total four square meters and weigh nine tons.  Now that the location has been found, the participants are now discussing form and material. People are still living in Wersten, who remember the events of Christmas 1944 and also for the younger generation, the memory of the events of that time is important,” says Heinz-Leo Schuth, chairman of the Heimatverein Wertsener Jonges.

9th October 2020 – Confirmation today that the Dusseldorf Council have agreed to the location and placement of a memorial using the Hercules engine which was discovered in December 2019.

Rheinische Post journalist Simona Meier at the crash site in Wersten on the 76th anniversary: