During the height of WWII, French airmen, exiled from their children and families brought Christmas Spirit to children in Britain. (in English & French)

Following the liberation of North Africa by the Allies in 1943 French Air Force personnel were released and shipped to Britain to form French squadrons within the Royal Air Force.

The two French Heavy Bomber Squadrons, with over 2300 airmen, had formed No. 346 “Guyenne” RAF & No. 347 “Tunisie” RAF squadrons at York and by December 1944, they had taken part in the bombing of German positions in Normandy on the night before D-Day, attacked the German industrial heartland in the Battle of the Rhur Valley and helped destroy of the V1 rocket sites across Northern Europe, which had pounded London.  Unlike other foreign air forces who flew within the RAF, the British Halifax bombers carried French roundels and at the RAF base near York the language was all French!

Located in the centre of Great Britain, York is the historic “Second City of England” founded by the Romans in 71 AD and later the 9th Century “Yorvik” was the capital of Viking Britain from Northumbia to the River Thames. During World War Two the region around York was home to almost 40 operational RAF airfields, mainly RAF Bomber Command. 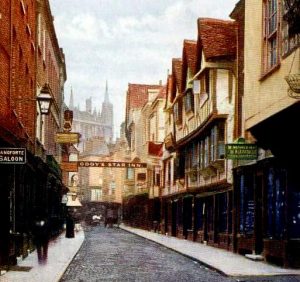 The medieval streets of York in 1934 – almost unchanged to this day.

This story began just three days before Christmas, on 22nd December 1944. Arriving by train at York Railway Station on this cold December morning was Lieutenant André Lemarch, a French air force instrument technician who was returning to his base on the outskirts of the City. 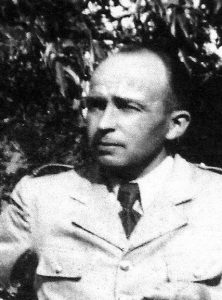 Upon disembarking from the train, André noticed a large  Christmas Tree on the station platform which had been erected by the London & North Eastern Railway (LNER) with collecting boxes for local children in the three hospitals of York. 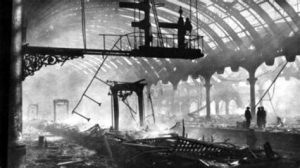 Few household luxuries were available in Britain at that time, never mind things for children.

With food rationing throughout Britain, ingredients for Christmas were hoarded for months in advance. Although some basics were slightly increased for Christmas, most meat especially like turkey was unavailable. Traditional Christmas Pudding or Cake had to be “supported” with breadcrumbs and vegetables, like carrot. The “buzz-word” of the day was ”mock”. There was “mock cream”, “mock goose”, many different varieties of foods made with alternative ingredients.

From 1941, in order to conserve paper, the Government had announced that ‘no retailer shall provide any paper for the packing or wrapping of goods excepting food stuffs or articles which the shopkeeper has agreed to deliver‘. This alone made it rather difficult to keep gifts secret!

All available manufacturing was concentrated on the war effort, and after four and a half years of war and the depravations caused by the huge losses of freight by the U-Boats in the Atlantic, virtually nothing was available to cheer the children, especially those in hospital.

It was just 3 days before Christmas – but André had a plan!

He thought of an idea to use the skills of his aeroplane mechanics department and workshops to make childrens’ toys, so he approached his boss Commandant François Churet. (Chef des moyens techniques) 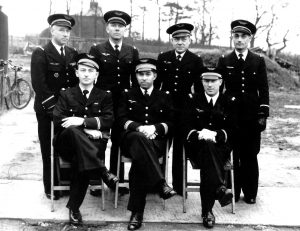 Cmndt. Churet was responsible for ensuring the 40 huge Halifax four-engined bombers were ready for action at any time. He had 880 mechanical engineers and was responsible for every part of each aircraft: fuselage, engines, bombs, fuel, parachutes, electronics and equipment of all kinds. 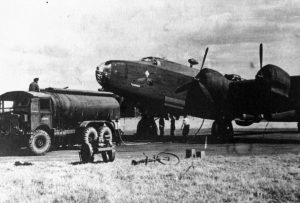 Most repairs and parts were manufactured on site and they had to work day and night 24/7 to keep the two squadrons flying as the war in Europe reached a critical period. 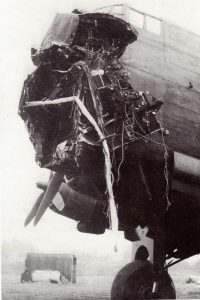 Halifax bombers returned from missions with damage which had to be repaired quickly.

The Christmas toy project took place at the height of the aerial war when French and British airmen were being killed at the rate of 51% – the highest attrition rate of any Allied or Axis military unit in the war, higher than those in the horrific trench warfare of World War One. 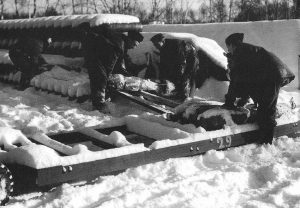 Mechanics were responsible for the highly damgerous job of fitting the bombs to aircraft – whatever the weather!

Despite the huge workload and pressure on his men Cmndt. Churet and the Base Commander Colonel P. Bailley agreed to the idea and André asked for volunteers amongst the men.

Immediately French mechanics and engineeers stepped forward and a small workshop was set up, with strict orders that they must not hinder aircraft repairs, they must work in their own time and only use scrap materials.

They had under 3 days to go before Christmas! 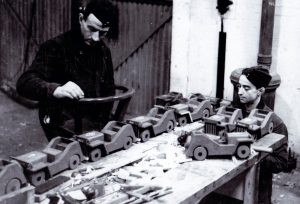 The “toy production line”. Work underway in the tin huts warmed only by a “pot-bellied” stove. 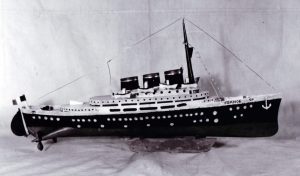 The enthusiasm amongst the airmen was such that a competition soon became necessary and prizes were to be awarded for the best toys. A “jury” was presided over by Commandant Churet, with first prize of a bottle of whisky going to the huge detailed model of the ocean liner “France” – which could float. 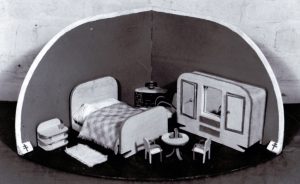 Made from beaten metal plate, the dolls bedroom with functioning lights.

Second prize, a bottle of Gin, went to “The Rose of Alsace”, a child’s bedroom model with a fire and lights illuminated with batteries, 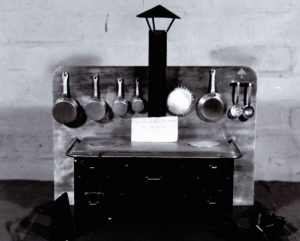 The Model Kitchen by Sergent SICRES

The third prize of two bottles of aperitif, went to a complete child’s model kitchen with oven, utensils and pans.

In total, a staggering 204 children’s toys were made in just 3 days (and nights), often using only scrap wood carved with razor blades. 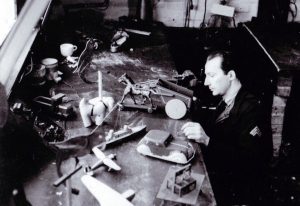 Time was short and the clock was ticking to Christmas Day 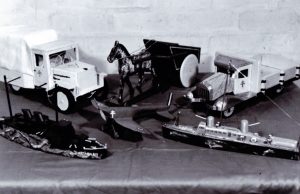 A wide range of toys – note the Free French symbol on many models.

At midday on Christmas Eve they were all loaded up onto one of the station’s lorries and, by previous arrangement, were driven to the famous 18th century Mansion House, home of the Right Honourable Lord Mayor of York, Councillor H.C. de Burgh. 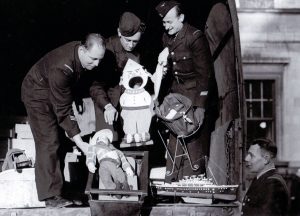 French airmen delivering the toys to the Mansion House – Residence of the Lord Mayor of York – 24th December 1944.

(centre: Emile Mechaly, later to become one of the highest decorated French airman of WW2))

The Lord Mayor, his wife and the Civic Party including the Sheriff of York, Mr J.H. Kaye, greeted Cmdt. Churet and the French airmen. The toys were then off loaded into the Mansion House State Room which one official noted “suddenly looked like a toy shop”. There, they were put on public display before being given out to the children on Christmas Day, who were absolutely delighted!  Many had never had such gifts in their lives. 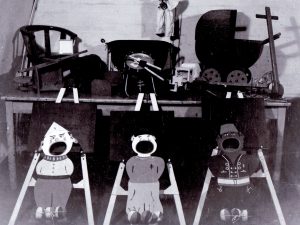 Highly colourful and attractive games were made – many of French origin.

On 1st January Colonel Bailley wrote to the French Provisional Government Headquarters in Carlton Gardens, London where he explained the work of his mechanics to bring some happiness to British children in hospital. He ended the letter with:

“I wanted to bring these facts to your knowledge, because they are an excellent work of the good spirit and good heart of the staff, and honors the good taste, hope, initiative and resourcefulness of the French mechanics”. 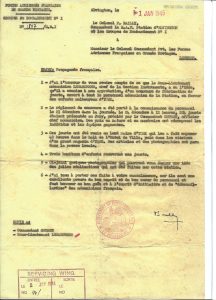 Many of the French airmen had not seen their own children and families in over 4 years. Some had little news and even knowledge of how their loved ones had been faring in Occupied France. By this time over 200 of their air crew colleagues had been killed in the previous 6 months alone, and would not be returning. The good hearted nature and commitment of the French mechanics and technicians in undertaking this extraordinary kindness towards British children is an Anglo/French story we should continue remember. 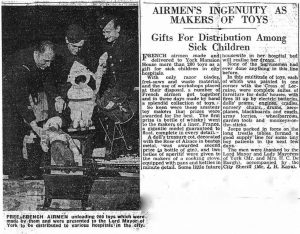 December 2014 – At the same location, exactly 70 years later the Rt. Hon. Lord Mayor of York, Councillor Ian Gillies, the Sheriff of York, Mr John Kenney and AFHG Director Ian Reed, recreated the famous story when over 200 gifts from the Yorkshire Museum were delivered to York Mansion House to be distrubuted to children in hospital. 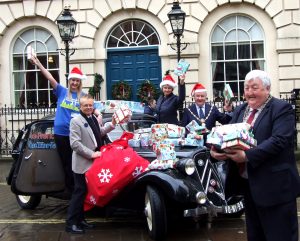 This story came to us from Commandant Churet’s son, Dr Jean-Paul Churet who had received the photographs and details from Sous Lieutenant Lemarchand’s son, Jean-Claude Lemarchand.