In her 2nd ‘Letter from Kyiv’ Kateryna Ziborova sends some useful advice for when you are under missile attack.

After 9 months of utterly outrageous aggression and atrocities against the people of a democratic European country the tendency to become “war weary” and blazé by each day’s repeated news of attacks and obscenities is something we have to guard against. We must continue to maintain their plight at the forefront of our minds as each day passes.  This long drawn out daily pressure upon the citizens of Ukraine has its effects in many ways and the parallels with the aerial attacks on cities across Europe during the Second World War shows how immoral aggression brings out the character of people under fire. This latest letter from Kateryna Zibrova with her young daughter in Kyiv gives an insight into the changes in people’s concept of the situations they find themselves, where initial terror turns to anger then to black humour, as human behaviour resigns to the situation and finds a mental release to the continuous stress.

As an enthusiast for camping and the great outdoors in peaceful times, Kateryna’s “be prepared” skills have come in handy as she lists a few notes for what most people simply don’t want to contemplate. Kateryna wrote the draft for this article whilst “standing guard” at the bomb shelter at her 5 year old daughter’s kindergarden, during one of the daily missile attacks on her city.

A Special Kind of Experience

Monday is always a difficult day. The end of that weekend feeling and the start of the working week, but this year in Ukraine it has become even more difficult than usual.  Mondays became the day when the russians most heavily shell the cities and civilian infrastructure across Ukraine, so a typically understated and defiant expression has emerged here in our country: “Mondays in Ukraine are a special kind of experience”! The war and bombardments terrified people in February and March, it made them angry in April and May and has become an annoying daily routine since June. But believe me, take careful note those of you who live in the rest of Europe. If your peaceful city is suddenly shelled by russian missiles, planes, ships, artillery, or drones the horror will pass very quickly, and it will be replaced by a healthy joyful anger with a touch of fatalism and black humour. 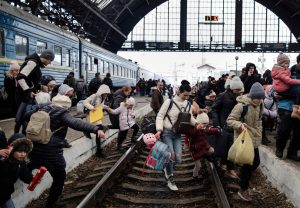 I think perhaps it will be strange for you to read of “when your peaceful city will be shelled by russian…’ But believe me, it was strange for me too until 24 February 2022, although at that moment the war with russia had actually been going on for 8 years. Until a missile actually arrives near your house, your brain simply refuses to believe in the reality of what is happening. So read this small collection of notes from the civilian “Front Line” of democratic Europe’s defence, on how to live and survive in a city under shelling. Remember that the russian `crazy gas station` covers ⅙ of the world`s landmass and no one can predict who it might attack next.  Be warned!

As a woman with a young child, here is my advice, because children are not only our future but also our most important responsibility and you should be ready for it. 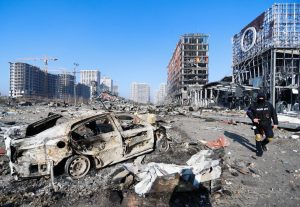 1. Do not ignore alarms

This is not a drill and not a joke. Amazingly there are still a lot of people who, even in cities that are constantly shelled, ignore the howl of the air raid alarms and continue to go about their business as if nothing has happened. They walk, get angry when they are asked to leave the store, and do not plan their route or take into account the need to hide. Deniability is a strong human trait, do not do that. Such people are usually the first to die.

My five-year-old knows that the roar of the air raid alarm means to grab an emergency bag and hide in a safe place.

2. A child should not be lost 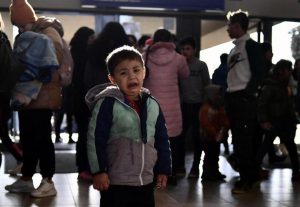 All children must wear a badge indicating who he/she is and the contacts of all relatives and friends. The badge must be under the clothes over the shoulder (remember – not on the neck, but over the shoulder). The child must memorize the phone number of their mother and father.

Your child should also have his/her own small emergency bag with documents, money, and a phone (preferably an old push-button phone) in case something happens to you and the child is left alone. Yes, it can happen, and you and your child must be prepared for such a situation.

3. Have a supply of medicines

If you take any medications on a regular basis, you should have at least a 2-month supply of them.

Like many people in February 2022 my daughter and I left the city for the countryside, unfortunately, next to a targeted military airport – (see my next letter coming soon).  Amongst all the stuff, I took 2 weeks’ supply of my antiepileptic drugs, because I live in the capital city of Ukraine and these drugs are in every pharmacy. Why would I need to keep boxes of medicines at home?  By March I luckily managed to get the medicines I needed during our war conditions from non-working pharmacies, brought to me by some very good people. I don’t think I would ‘please’ many others around me with a merry epileptic seizure, although I felt I could if needed!  So don’t do that. Have a two-month supply, because pharmacies will close immediately, and your illness will not disappear with them. Life goes on amongst the ruins of Kyiv

You should always be ready to run or hide. Being macho is not an option. Depending on the degree of danger and time for evacuation, your belongings should be divided into 3 levels:

1 – “Banana Bag” strapped around your waist with phone, medicines, money, and documents. It should be on you during the day, and at night next to your bed. You grab it immediately after grabbing the child.

2 – A small backpack with the most necessary things (change of underwear and socks, water bottle, knife, energy bars, flashlight, lighter, rope, wet wipes). You will put it on your shoulders if you have time to get dressed, but you will have to evacuate on foot.

*Never! NEVER!!! underestimate the importance of wet wipes. Especially if you have a child with you. Wet wipes are your best friend and an irreplaceable asset.

3 – A large bag with a change of clothes and shoes, tourist gas cylinders and burner, tourist cookware, an axe, a shovel, and a small supply of water and food. This is the third level of evacuation – by transport.

5. Learn the basics of first aid

How to clamp a wound, apply a tourniquet or bandage a wound. This is relatively easy to learn, and such knowledge will be manageable.

But no, you do not need to take out bullets with pliers!

No, you do not need to cauterize wounds with gunpowder!

No!!! Do not perform amputations in the field!

If you are not a medic, you will only do harm. To know how not to harm – learn the basics of first aid. When you hide from shelling indoors, there should always be 2 walls between you and the street. No windows, glass surfaces, or tiles. The best place is usually a hallway. Look at the plan of your apartment or house, find such a corner with strong walls, and prepare it in case of sudden shelling. A small chair, a bottle of water, and a chocolate bar will be enough. If you add a blanket, it will be great.

You are not Rambo or even John McClane or Sarah Connor. If a civilian hears shooting, he/she falls to the ground and covers his/her head. You can cautiously move to cover, but do not stop covering your head.

No, you do not need to look at what is happening there!

No, you do not have to run to where they are shooting to help! If you are a military professional, why don’t you fight? And if you are an ordinary civilian, you will do more harm than good.

If you see a wounded man – help him if you can. If he is wearing a russian military uniform – hit him on the head with a brick! 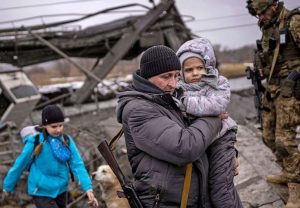 A supply of canned food and bottled drinking water for at least 1-2 weeks should be in your home. Do not forget to check that everything is not spoiled or damaged. 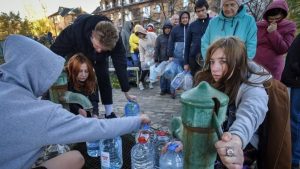 Separately, you need to keep a supply of water to wash with (keep a bath or spare wash basin filled), bags to collect waste, and a small shovel to bury the waste on the street. The provision of public water supplies and sewage disposal can disappear very quickly, and you definitely don’t want to find out what it’s like to live in a medieval city without water and with sewage around you.

And wet wipes. Trust me, you can never have too many wet wipes!

Winter is coming…………today in Kyiv 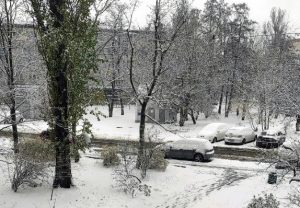 Thermal underwear, warm socks, warm hiking or hunting clothes, a warm sleeping bag, good boots, and a jacket are the things you should have. Don’t forget about a gas cylinder, a tourist stove, and a thermos.

* It so happened that while I was writing this article with all our blackouts and air raids, not only did Monday become such a special day. The daily strikes across all the days of the week are now almost becoming equal. 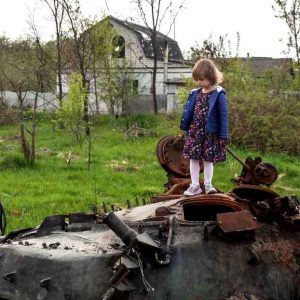