(Eng/Français) – Almost a year has passed since the full scale war against Ukraine began and stunned a peaceful nation. The world watched and admired the determination, resourcefulness  and courage of its people. But as the months passed by with daily news of bombings against civilians, the constant repetition perhaps blurred the edges a little as the rest of us could not truly feel the personal impact this had on ordinary intelligent human beings, torn from their modern western democracy into an almost medieval struggle for survival.  Following on from her insightful series “Letters from Kyiv”, a young Ukrainian mother and writer, Kateryna Ziborova, reflects back upon the initial shock and resulting fear which they all felt when their lives were turned upside down on 24 February 2022. 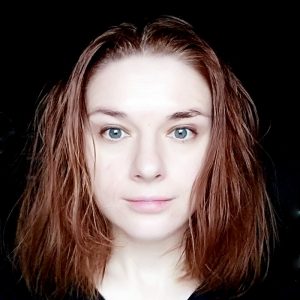 That March, when the fear still was

I couldn’t write this text for a very long time. Of course, the air raids, constant blackouts, and traditional colds that the child brought from kindergarten on New Year’s Eve interfered. They interfered, but the truth is that most of all the writing of this text was hindered by fear. Not the fear itself, but the memories of fear. March 2022 was the month when the fear still was.

You see, for the last 5 days of February, I could not yet fully understand and believe in what was happening. The war had been going on since 2014, but it was far away. It was as if not quite real, and then it came right to my door.

It is a very big difference when a rocket comes 300 or 3 kilometers away from you. My husband stayed to defend our city, and my daughter and I left, but I still could not believe what was happening.

I remember the last days of February as I waited for my brother to take me and my child to a safe place.

My 5-year-old daughter, fully dressed, wearing a jacket and boots, was sitting in the bathtub, covered with towels in case of explosions and the possibility that the tiles from the walls could hurt her with shrapnel. I was crouching next to her, stroking her head and shuddering when I heard explosions.

The next vivid memory is how we were driving through the city and saw men going to the recruiting offices. Excited young guys, barely 18 years old, nervous 30-year-olds, evil-calm 40-year-olds, focused 50-year-olds, and 60-year-olds with ice in their eyes. A lot of men. In sportswear and camouflage, with small backpacks behind their backs, many already with weapons behind their shoulders.

Another one – my brother and I are standing on the threshold of my late grandmother’s old house at night, looking at the flashes of distant explosions and saying to each other that we can’t believe it.

And another one – I teach my daughter and nieces how to fall to the ground and cover their heads with their hands when they hear explosions or shots.

If you haven’t had to teach your 5-year-old child how to cover her head when missiles are flying or say what to do “if mom can’t go with you”, and how she will have to go out alone and look for friendly soldiers by recognising Ukrainian, British or USA camouflage patterns and hide from those wearing Russian “dubok” patterned uniforms…..then you can’t understand why I want a frightful death for all russians.

This was still February 2022. You know, we often say that our February has not ended, it is more than 300 days in Ukraine since February 2022. But after February was March. And with March the fear has come.

My grandmother’s old house, where the water and heating are suddenly turned off just when they want. Where it is impossible to remove all the poison from mice, which covered the floor when the house was empty. Where mobile communication does not work. Where the nearest neighbours are a kilometre away, but there are very few of them, the old village is dying out.

And there, behind the forest, is the airport. The airport, where the russians have been trying to land for the whole month. Where they shoot every day, and at night there are explosions above it. Where there is a constant evil stink of burning.

In the daytime, it is not so scary. There is always something to do, and also to keep an eye on a hyperactive city child who has escaped to the open space with chickens, turkeys, cats, dogs, rabbits and other domestic animals, and interacts with them in every possible way. In the daytime, even distant explosions are not so scary.

And then the evening comes and the child starts to cry because she misses her daddy, she was taken away from her pink room with dolls to some old house in the middle of nowhere, where there are no other children, and only her mother, grandmothers, and animals. And she wants to go home and to her dad. And when you finally calm her down and lie down next to her, night comes and fear comes with it. Because you are terribly frightened for those relatives and friends who stayed in the city. Because you also miss your husband madly, you are proud of him and you fear for him. Because it is very horrifying when the air defense system works. It’s great, that it works. It means that enemy missiles will not fall on your head and the heads of your family, but it is very fearful when it works close to you. It is very terrifying when you hear the sounds of shooting and fire over the airport again.

It is very frightening when the air raid alarm is blaring from your phone. But the scariest thing is fighter jets flying over the roof of the old house. You understand that they are ours and realize they are protecting you, but fear takes you all.

For the first 2 weeks, I slept with my clothes on, and laid my daughter down the same way, only taking off our boots and jacket. But I held her with one hand and the strap of the ‘alarm backpack’ with the other. So that I could instantly grab and run. I did not unpack the backpack and was ready to run with my girl every moment.

My mother and aunts and I watched the news with horror and ran in circles around my daughter. We listened and read about Bucha and Irpin and turned grey from listening and reading.

I was terrified all the time. All that terrible March. And then the fear went away. You know, perhaps all those who lived through that March in Ukraine simply do not know how to be frightened anymore, because even fear is a limited amount, and then the fear has gone.

I still hide with my daughter in a ‘safe corner’ at the sound of an air raid, I still keep my ‘alarm backpack’ packed, and I am constantly on the alert. But I can’t be in fear anymore. Because that March, when the fear still was, there was too much of it. It passed over me and through me. And fear has gone. Only I remain.

Note: I would like to stress that I deliberately write “russia” & “russians” with a small “r” and I insist upon it because there can be no respect for a terrorist country.